Female executives are no strangers to the struggle for workplace equality and fair compensation. Although many Americans mistakenly believe gender inequality in the workplace to be a lingering problem from an unenlightened era, women in the corporate sphere struggle daily with questions of career and motherhood, the supposedly broken glass ceiling, and receiving disparate pay for the same job as male colleagues. The wide gap between men and women in the professional world is growing clearer every day. According to Catalyst, women make up just 17% of all corporate boards – a number that’s remained stagnate for over a decade – and only 15% of our nation’s CEOs are women. For the corporate world to thrive, it’s imperative that men and women advocate for a stronger female presence in the executive sphere. 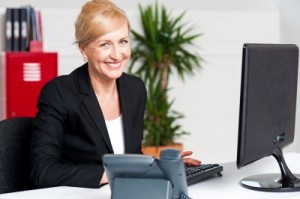 Studies show that less than half of the female graduates of prominent universities remain in the workforce longterm. Due to familial responsibilities, workplace biases, and roadblocks that keep women from advancing into higher level positions, the American business world has lost a substantial portion of its most qualified professionals. Women like Abigail Johnson, the recently appointed chief executive officer of Fidelity Investments, have successfully navigated the treacherous waters of female corporate advancement, but as other successful female executives like Sheryl Sandberg have proven, the battle is far from won. Gender equality in the workplace is especially visible this week in light of Microsoft CEO Satya Nadella’s recent comments about women needing to entrust pay raises to karma. Studies prove that a diverse workforce benefits both individual employees and the company as a whole, but how can we, as working women, achieve equality?

The Next Steps for Female Executives

Unfortunately there’s no proven formula to help women overcome gender bias in the executive job search. However career experts agree that professionals – especially female professionals – need a strong voice to succeed. If you’re a woman searching for a promotion, a new job, or a career shift, here are 3 ways to push the corporate world toward gender equality: